Sprouting, the green resurgence of life

If a few weeks ago we witnessed that magical moment known as "Weeping of the vine" -one of the most amazing phenological processes that occur in this plant-, now we are beginning to see more signs of activity in our vineyards. This is the appearance of the first long-awaited green shoots or buds on the vine shoots, a sign of the beginning of a new life cycle and, therefore, of a new vintage. An incredible and exciting journey that will end with the grape harvest.

Thus, after the weeping of the vine, which lasts for about a week or ten days, bud burst or bud break is the first sign that the plant has awoken from its winter lethargy and begun a new life cycle.

When temperatures rise above 10 degrees Celsius, the sap begins to circulate upwards from the roots to the stems. The buds, which are still covered with the cotton wool that has protected them during the winter, swell and elongate until they form small, thin, tender green tips, which emerge in the form of new shoots and later grow into leaves.

While expected, this is also a very feared moment for vine growers, due, above all, to the risk of frost, which at this time of the year can surprise the plant in the initial stages of sprouting, freezing and killing the first delicate shoots. A risk that, in recent times, has been growing more and more due to global warming and climate change, which produces earlier budding, when the "natural" winter has not yet ended.

In our case, Palacios Vinos de Finca's environment is located in two regions: Rioja and Ribera del Duero, with privileged vineyards in high, cool areas, which means that bud break usually comes during the month of April, partly reducing the disastrous consequences of possible frosts. At this time of year, it is also important to be particularly attentive to the evolution of the vineyard, the weather conditions and the observation of possible pests and wood diseases.

In a few days, these first green shoots will begin to turn into vine leaves, which, translated into the calendar of tasks in the vineyard, will mean spergurating. In other words, leaving on the pruning thumbs only the shoots that are going to be necessary to avoid excess grapes and vegetation, and that those that remain meet the quality standards of Palacios Vinos de Finca. 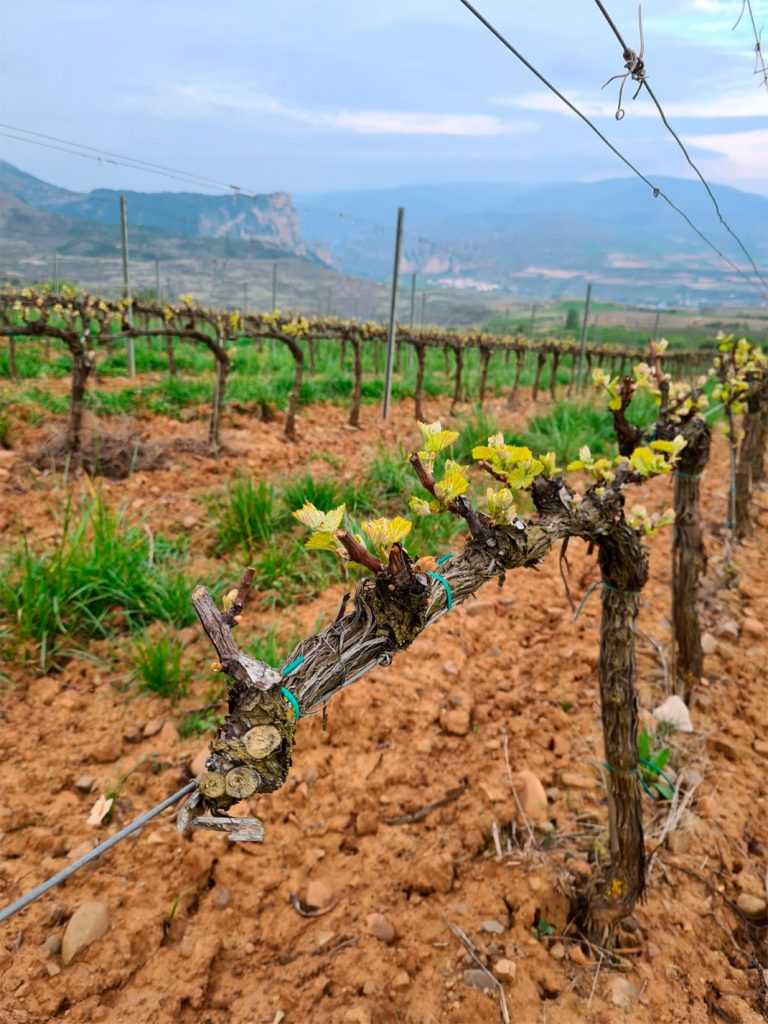 In the three wineries, Nivarius, Proelio and Trus, the team works with the same philosophy: to know the soil in depth in order to know exactly what wines will be obtained and which plants are best suited to them. Precision viticulture in its purest definition.

Sustainable viticulture and a vocation for wines linked to their origin are at the heart of everything.

The importance of the territory, of the soil as the protagonist of our philosophy also means that efforts are focused on its protection. Natural conservation and sustainability are the fundamental foundations on which we base our daily work.

We use cookies on our website to provide a more relevant experience by remembering your preferences and repeat visits. By clicking "Aceptar", you agree to the use of all cookies.
Cookie settingsACCEPT
Manage consent

This website uses cookies to improve your experience while browsing the website. Of these, the cookies that are classified as necessary are stored in your browser, as they are essential for the functioning of the basic functionalities of the website. We also use third-party cookies that help us analyze and understand how you use this website. These cookies will be stored in your browser only with your consent. You also have the option to opt out of receiving these cookies. But opting out of some of these cookies may affect your browsing experience.
Necesarias Always Enabled
Las cookies necesarias son absolutamente esenciales para que el sitio web funcione correctamente. Esta categoría solo incluye cookies que garantizan funcionalidades básicas y características de seguridad del sitio web. Estas cookies no almacenan ninguna información personal.
No necesarias
Las cookies que pueden no ser particularmente necesarias para el funcionamiento del sitio web y se utilizan específicamente para recopilar datos personales del usuario a través de análisis, anuncios y otros contenidos integrados se denominan cookies no necesarias. Es obligatorio obtener el consentimiento del usuario antes de ejecutar estas cookies en su sitio web.
SAVE & ACCEPT

Your cart is empty.