Veraison: From greens to golds and reds

Faced with an excellent vintage

If there is one thing we are known for at Palacios Vinos de Finca, it is for being a restless winery, in which the territory is the origin and which we place at the centre of a wine-making project aimed at producing unique wines. A philosophy that we share in our three wineries in Ribera del Duero and Rioja (Trus, Nivarius and Proelio).

This is what we did with our Maturana Blanca, a native variety that is practically extinct in the region and which has become one of the pillars of our Rioja white wine winery, Nivarius. However, we have not stopped there.

When at Palacios Vinos de Finca we see a variety that we do not control and we see that it has a good physiological aptitude, we try to reproduce a plant.

This happened to us with Tempranillo gris or Tempranillo royo. While walking through our vineyards, we came across a plant with one arm of red grapes and another arm with albino grapes. As a result of this discovery, we marked the vine, selected what was tempranillo, and the following year we reproduced it in the tempranillo plant of the winery, with an aerial grafting. We harvested these grapes, from which we obtained a perfectly ripe and completely white must. In other words, it is a mutation of the red Tempranillo, with very little or hardly any colour. 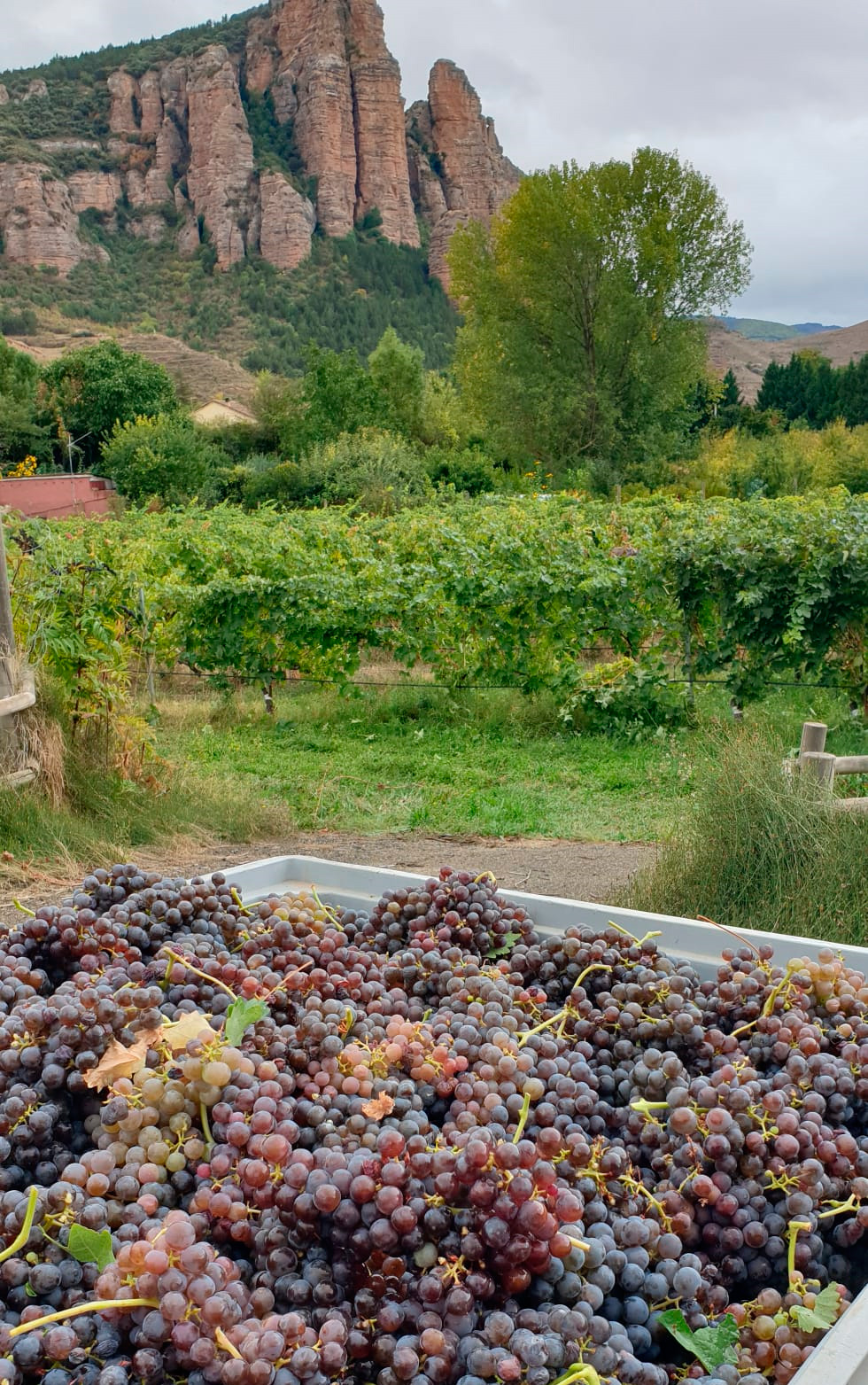 Tempranillo gris or royo was discovered in 2010 in a vineyard in Badarán and was described by Fernando Martínez de Toda, professor of Viticulture at the University of La Rioja, together with researcher Pedro Balda. Both had been studying samples located in vineyards for years, to try to find out if they were unknown mutations or if they had already been catalogued in other regions, for example.

The discovery of these two researchers was the result of a long-running project aimed at preserving minority grape varieties in danger of extinction. At Palacios Vinos de Finca we share this passion for preserving the viticultural legacy of our region.

It seems almost unbelievable that in a territory like ours, with such a long wine-growing tradition, unknown mutations or varieties continue to appear. This is the magic of nature. It is the land that sets the tone for all our work, that sets the course; it is the element from which everything else starts, that leads us and focuses our efforts to obtain the raw material with which we make wines with their own personality. All of this, together with a work that is the result of observation and meticulous analysis.

Another of the varieties we are working with is the Morisca. We had already read about it and its existence in the Nájera area, between Hormilla and Hormilleja. In this area we have carried out a massal selection -a plant breeding method- of Garnacha and also of old Viura grapes. In this case, we chose to bring this plant material from outside La Rioja and we have reproduced it.

Must of the Moorish variety

This year, we will carry out the first vinification of just 400-500 kilos. The next step, with respect to this variety, will be to see how suitable the wine we make will be.

The concern and interest are also behind the fact that at Palacios Vinos de Finca we have also made a selection of some special Graciano grapes.

However, the most powerful work we are doing at the moment is with garnachas from Najerilla and we are working with viura grapes. But we are always on the lookout for interesting new varieties. It is part of our DNA.

This website uses cookies to improve your experience while browsing the website. Of these, the cookies that are classified as necessary are stored in your browser, as they are essential for the functioning of the basic functionalities of the website. We also use third-party cookies that help us analyze and understand how you use this website. These cookies will be stored in your browser only with your consent. You also have the option to opt out of receiving these cookies. But opting out of some of these cookies may affect your browsing experience.
Necesarias Always Enabled
Las cookies necesarias son absolutamente esenciales para que el sitio web funcione correctamente. Esta categoría solo incluye cookies que garantizan funcionalidades básicas y características de seguridad del sitio web. Estas cookies no almacenan ninguna información personal.
No necesarias
Las cookies que pueden no ser particularmente necesarias para el funcionamiento del sitio web y se utilizan específicamente para recopilar datos personales del usuario a través de análisis, anuncios y otros contenidos integrados se denominan cookies no necesarias. Es obligatorio obtener el consentimiento del usuario antes de ejecutar estas cookies en su sitio web.
SAVE & ACCEPT

Your cart is empty.